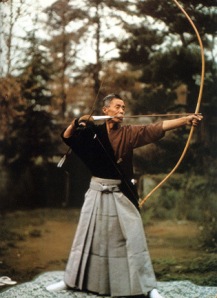 Kyudo is a traditional Japanese discipline that uses the performance of shooting a bow and arrow as a means of cultivating the character. Kyudo differs from other forms of archery in that it places greater emphasis on the psychological and intuitive relationship of the archer towards shooting. Accuracy on the target is viewed not as a goal in itself, but rather as evidence of the correct balance between technique and the psychological state of the archer.

Kyudo means literally “way of the bow”. Historically, it comes from two main lineages: mounted archery and archery on foot. These, in turn, can be divided into a ceremonial tradition, which emphasized ritual and etiquette, and the warrior style, which expressed the vitality and technique for the battlefield. These have contributed to the development of kyudo in its modern form as a discipline for peace and self-cultivation.

As a means of personal growth, kyudo is more than simply a form of archery. The regime of practice requires the use of etiquette to train attitude and behaviour. In becoming more open-minded, practitioners cultivate sincerity that gives vitality to the shooting and has meaning for their life.

The highest ideal of kyudo is the simple beauty of the shooting that is expressed through sincerity of action. This natural simplicity is at the very heart of traditional Japanese culture. 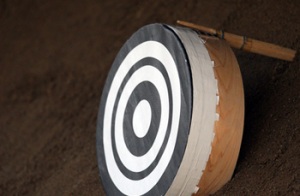